There’s a rich history work that is available, on every conceivable topic, and in many different forms. But what is it about Plato that holds up so universally, whereas some authors who wrote merely fifty years ago are all but forgotten? Or why do some books stay in a personal library for life?

What writing is it that matters? Where do we go to drink from the well that never runs dry?

My favorite authors include Seth Godin, Neil Gaiman, and recently John McPhee, Alan Watts, and Mark Adams. I struggled through Kerouac’s On the Road, but I greatly enjoy reading his poetry.

And of course, there are others. And I’ll keep buying books, reading what I can, and scribbling along on here and in my notebooks as I do. Will this writing matter in 100 years? Honestly, no. But someone’s writing will, and that means something.

Hello again, campers! Ready for your campfire tales? No? Not really?

I finished listening to the Camp Red Moon short anthology, and it took me a while to recognize the voice in the second story. Kevin T. Collins, who’s performed the audiobooks to the Sam Capra series by Jeff Abbot. Speaking of, it’s about time for another installment in that series.

Anyway, here’s what’s on my plate this week.

Reading: Wild: From Lost to Found on the Pacific Crest Trail by Cheryl Strayed. Just getting started, and I haven’t seen the movie either, but I recognize the desire to travel, isolate, and found yourself. A lot of my library seems geared towards those sentiments, even if they all haven’t been read yet. A 26-year-old, reeling from tragedy, decides to make the 1100-mile solo hike.

Listening: You Learn from the Alanis Morrissette jukebox musical Jagged Little Pill. I had this in the nineties (it’s probably still floating around my cd collection somewhere). This ensemble number is really touching, and I enjoy it a lot.

Doing: Goal setting. I’ve been using a couple of resources – Designing Your Life, Tony Robbins, Seth Godin, & Tim Ferris. Before I start making cuts to some of my projects and interests, I want to make sure I’m doing it for the right reason. So having those goals set are important.

Today I wanted to share a couple of things.

First, the new short-format podcasts from Tim Ferris on Books I’ve Loved. There are two of these so far, the first with Ferriss’s suggestions, and the second with book suggestions from Seth Godin and Esther Perel.

Also on books, this Laura Vanderkam article on How to Make Time to Read, from Medium.

My recent posts have been about books and reading, and these two offerings seemed to fit right in.

The prompt was Seth Godin’s interview with Tim Ferris on The Tim Ferriss Show (ep. 138). “The first thing I would say is everyone should blog, even if it’s not under their own name, every single day. If you are in public making predictions and noticing things, your life gets better. Because you will find a discipline that can’t help but benefit you. If you want to do it in a diary, that’s fine. But the problem with diaries is because they’re private, you can start hiding. In public, in this blog, there it is. Six weeks ago you said this; 12 weeks ago you said that. Are you able, every day, to say one thing that’s new that you’re willing to stand behind? I think that’s just a huge, wonderful practice.”

I like looking at the world – its working philosophies; the creative industries; environmental concerns and conservation efforts; books and publishing; and many other things that come into my attention. If I’m lucky, I have an original thought about them.

At the very least I have something to say about what’s happening, or maybe I just to shine a light on it.

And the world needs perspectives – of all shades – to be shared.

This blog is shipping. It’s a continuous reminder to me to get the work done. I’m at a point where I can now write every morning. I write here, and I write in my other media (at this time a novel, which I started during NaNoWriMo, but which has been a holdover).

Work completed isn’t much until we get it out. Really, it isn’t completed until you put it out. And it’s scary to put it out. There are times when I’d rather not see the finished product.

I do some work in improvisational acting, and that’s instantaneous shipping. That’s getting up, creating a scene (doing the work) and performing it in front of an audience (shipping), all in one moment. Terrifying!

But doing that, it’s helping me here. It’s helping me everywhere. Because in improv, as in any other work, it’s okay to fail. Maybe one project lands flat. Flatter than flat. Just put it in the dungheap and move on.

Seth Godin has a graph of shipping that looks like this: 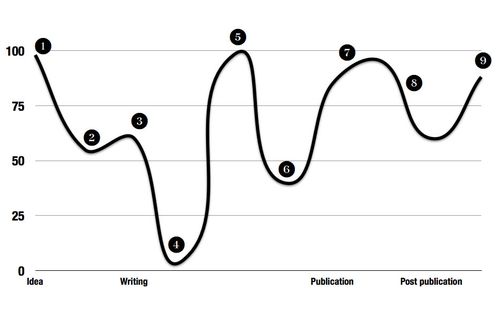 This is specifically for the publication of a book. But it applies to any artistic medium. The Y-axis is the joy you feel for the project, and the X-axis shows time passing with each milestone. I think data point 6 is even lower than what’s shown because fear can take hold. That resistance.

But it’s so important to ship. To accept that fear. That fear is a gift. It’s your body telling you that what you’re doing may very well be important. So don’t stop now. Accept the gift, and get your idea out there.

Something I heard long ago was about a songwriter who would frequently hear tunes  while driving. Like, original tunes, only in the mind. And it was frustrating, because while driving it’s hard to write down music (this was before cell phones and inexpensive voice recorders, but you get the idea).

The moral was, train your inspiration to come when you’re ready for it. Not when it’s convenient for your muse.

Somewhere in Stephen King’s On Writing, or perhaps in one of the interviews he’s given about writing, he says that the way he writes is to start at the same time every morning, write the same number of hours, take the same breaks. His inspiration comes during that time.

Certainly he may get ideas while showering, or taking out the trash. Notebooks and recorders are handy in that way. But mostly he puts ideas to paper during that time when he’s set down to write.

Thankfully, we are never lacking in ideas. Good, bad, indifferent, we think things up every day. Many aren’t original. Some are. Of the original, many are terrible. Some aren’t.

As Seth Godin says, ““If you put enough bad ideas into the world, sooner or later your brain will wake up, and good ideas will come.”

I thought of this because as I was waking up two mornings ago, I heard a whole song. An original song. I got as much of it down as I could, as I was just waking up and fumbling with the recorder. I unfortunately haven’t trained my muse in the same way.

Yes, I think that has stuck. I like it. It’s kind of like my weekly check-in, but with less introspection. Just things that have caught my attention.

What I’m reading: Monsters Among Us: An Exploration of Otherworldly Bigfoots, Wolfmen, Portals, Phantoms, and Odd Phenomena by Linda S. Godfrey. I wanted to get one more seasonal read in before November. Well, what to say. Do you believe in spirit creatures, possessions, skin walkers, UFOs, or otherworldly portals? Or not? Either way, an interesting book broken down in case studies.

Additionally, if you check out the @WerewolfReports bot on Twitter, you can keep updated on odd werewolf sightings… If you believe in that kind of thing.

What I’m listening to: Lore, from Aaron Mahnke. Specifically the Trick or Treat episodes from 2016 and 2017. But, listen to whatever you feel like. Or, watch the video series on Amazon Prime Video!

What I’m spending time with: Switching over my recording from Audacity to GarageBand. I host a radio show twice a week, which is prerecorded and aired on 107.1 WZEA. Until recently I had used Audacity. However, since updating the MacBook, my microphones don’t work for recording. There’s a cumbersome workaround, but I’d rather have a simple time making my episodes. So I’ve been looking at the GarageBand recording platform. It seems that there used to be a Podcast recording option, since removed, but it works fairly well. I’ll give it a try, and either continue on it, or switch back when the new update for Audacity comes out.

Other things of interest this week: