The week that passed was a long one, I’m not going to lie. The fourteen-hour car ride back to Florida was a bit exhausting, and the trip itself wasn’t as restful as I would have liked. Nonetheless, here’s some things that I spent some time with this week.

What I’m reading: Tip of the Iceberg by Mark Adams. Just cozying up to this book as the weather is getting cold. Thinking about my summer in Alaska, and what the future holds.

What I’m listening to: Antonin Dvorak’s Symphony No. 9. Also known as the New World Symphony, this makes me feel like it’s Thanksgiving. I enjoy this recording from the Slovak Philharmonic Orchestra. 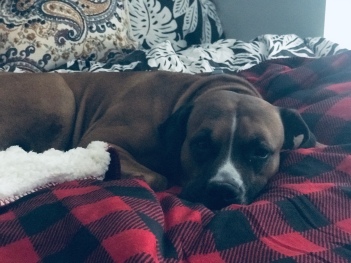 My 60 lb. boxer is nearly seven years old, partially blind and deaf from an invitro stroke, and ultra-hyper. Breaking him of some bad habits will take a good deal of time, but I’m certain that he and I are up to the challenge.

Other things of interest:

“Watching a creature die—one who is the last of its kind—is something I hope never to experience again. It felt like watching our own demise.” – Ami Vitale